With a genuine mixture of sadness and joy, Catherine and I went up to Blackburn Cathedral yesterday to attend the ‘service of celebration’ for my good friend Ben Ashworth who died recently following a long 5 year battle with Bowel cancer. Some on you may also follow him on-line so will also know him well and what he has endured.

Ben was no ordinary individual that was abundantly clear. Not only through the posts he wrote on his social media sites, but through the words he spoke. I first met Ben a few years back at a parliamentary reception at the House of Commons while I was in the middle of my own cancer treatment. I was told by the beating Bowel cancer charity team that I really should meet “this guy who loves running like you”…from the very first conversation it was very evident that this is a man who had exactly the right attitude. He was so incredibly modest about what he had been through and always fought to keep the spotlight on the charity and not on his own predicament. It would have been completely understandable to have had a least a modicum of self pity, however that simply wasn’t Ben.

Having been told originally that he had only months to live, he defied the odds for over 5 years. He once told me (at the London marathon last year) that he was sure that it was running and staying fit throughout the treatment which gave him this precious time with Louise and his girls.

You meant so much to so many people Ben. Please rest in peace knowing that you made such a positive difference in this world my friend.

Ben I miss you, but you will never ever be forgotten. Ever time I put a pair of trainers on I think of you, and like you I will never give up the fight xx 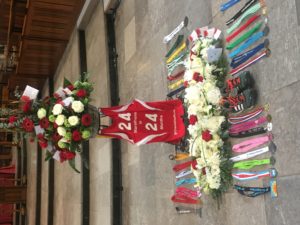 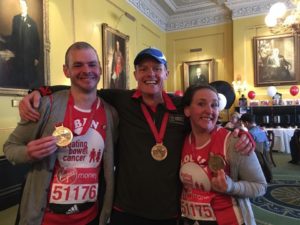 One Reply to “Bens day”