Since my last post, hopefully by now many of you have managed to see my justgiving page http:www.justgiving.com/runthroughcancer/ via my Face Book update. A huge thank you to those who have already generously donated!!. I am already over 1/3 of the £5k target, with the total now standing at £1.8k!.

Training has been going well since the last round of chemo…I have managed to clock up just under 100km in the last 2 weeks (with 2 of these runs being ‘10 milers’ as a ‘practise’ for the main event!). Side effects have started to kick in a little more (with hand tingling / numbness and some back issues), however nothing that isn’t manageable at the moment. I mentioned this to Alice and she has said that we just need to keep a close eye on, especially for when it potentially ends up moving to my feet. There are options available should this happen, like to bringing down the dose of Oxaliplatin so shouldn’t be a problem I hope. Also the main effects tend to be felt in the week that I have the actual chemo administered, with the second week feeling much better….I will cross everything that this will be the case on this cycle as well, which will mean that I am ‘good to go’ come the 26th October, bearing no last minute injuries (touch wood!).

I am thrilled to say that my brother-in-law, Tom, has said he wants to join me on the run as well. It means a great deal to me, not only as I consider him to be my own brother, but also that it was with him that I ran my first ever race back in April 2009 at the Taunton half marathon. We have had some running T-Shirts made up for the day…they will be ready later this week, however you can see the design below…: 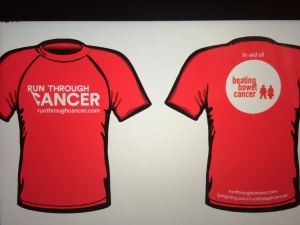 I hope that this extra bit of promotion will help in the fund raising efforts!.