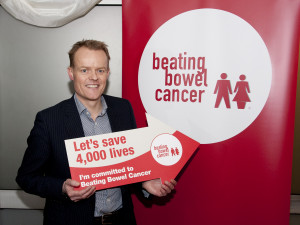 At the event, Beating bowel cancer stated a clear 5 year plan, to run through the whole of the next parliament to help improve awareness of bowel cancer, focusing on symptoms, diagnosis and screening. The key message being the need for earlier diagnosis. The fact is that in 90% of bowel cancer cases if caught early enough, patients can be successfully treated. Sadly the reality currently is that far too many people (both men and women, but especially men) leave it too late.

The bottom line (pardon the pun:-) is that we need to get the population of this country more comfortable talking ‘bums’, ‘poos’ and all those others words which for whatever reason people don’t like to refer to. The ‘stiff upper lip’ us Brits are so known for, in this case needs to be broken!.

All it takes is 10 mins of your time to get checked out with your GP….the chances are that you will be told that everything is ok, however if it does turn out to be something more serious at least they can then get to work to cure you!. EARLY DIAGNOSIS IS THE BEST DIAGNOSIS”!.

I met some wonderful people today and really enjoyed being involved in such a worth while event. One of them being a fellow runner who takes marathon running to a new level!…having run 6 marathons in 6 months while still battling bowel cancer is truly inspiring!. I was fortunate enough to meet with him and his wife who talked me through their cancer journey together. A lovely couple who have clearly been ‘through the mill’ over the past few years. It was great to be able to talk to him about how running has helped him focus on something so positive throughout treatment. I also got some handy tips on running longer distances with a colostomy which I will definitely try out once my treatment finishes and I start upping the mileage in preparation for the Berlin marathon later this year. I am also hoping that the two of us may be able to get together and join forces for a running related challenge in the future for beating bowel cancer.

All in all a really great day!